Wow! In honor of '#WomenEqualityDay' this Sunday, commemorating the Suffrage Movement, let's celebrate all the Democrat…

Democratic State Representative and incumbent Sara Cambensy discusses inspirational women who have represented the U.P. before her. She touches on issues that are important to women, and how being a female in a patriarchal political sphere has shaped her decision making. Cambensy shares her political influences growing up, obstacles she’s faced, and how she hopes to inspire women of the next generation.

MARQUETTE, Mich. — In 1925 Cora Belle Reynolds Anderson, a Republican from the Copper Country, became the first woman of the Upper Peninsula elected to the Michigan House of Representatives. It was only four years after women obtained the right to vote in the U.S. Anderson was the first Native American woman to hold office on the state level, serving one term until her district was redrawn in 1926 and she lost her seat. 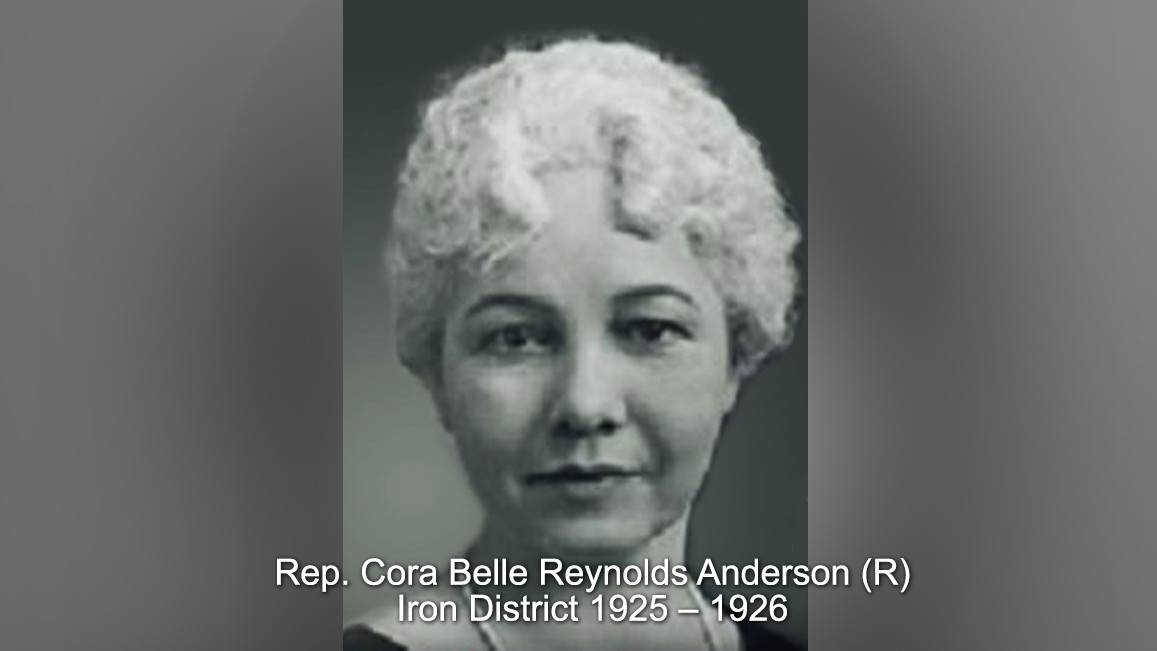 It would take the GOP nearly 80 years to honor her legacy with the naming of the House Office Building in 2000, and a portrait in 2016.

In 2009, the Upper Peninsula elected Judy Nerat in the 108th District, a Democrat representing Delta, Dickinson, and Menominee counties. Nerat was diagnosed with cancer shortly after elected and missed 100 votes in her first year. She died of multiple myeloma in 2012. 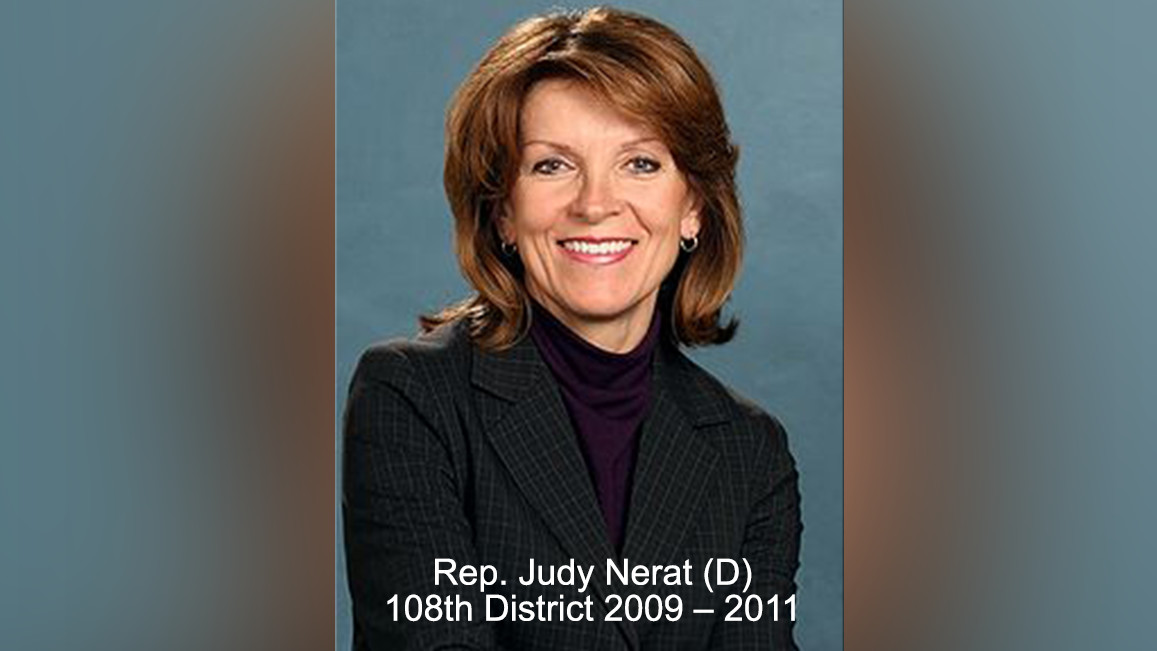 In 2017 Sara Cambensy, became just the third woman from the Upper Peninsula elected to the Michigan House of Representatives, and the first woman to represent her district. It was historic, an honor Cambensy says she doesn’t take lightly.

“When we look at how long it has taken a lot of districts in Michigan to elect the first woman be a representative, and to know we had one as early as 1925 in the U.P., it’s pretty remarkable,” says Cambensy. “It speaks of the U.P.’s independent nature, our willingness to be influential and fight to make a difference.”

Cambensy says although she’s disappointed that U.P. hasn’t seen many more women ascend to candidacy, it was an honor to be in a front-runner position going into the election. “It feels good,” she said. “If I win, I hope I can open the doors to others who want to do it.”

One of her goals is to inspire other women and young girls to take up leadership roles in politics, in society, and in education.

Last year, Cambensy attended Northern Michigan University’s Fall Conference Day where student organizations showcase their missions. She says she was amazed by the organizations available specifically to women, and recognized it as a positive trend she didn’t see when she attended in the ‘90s.

It was at NMU where Sara would be inspired by a roommate to join the Student Leader Fellowship Program (SLFP). Cambensy says it was one of the best things she ever did. “From that, doors opened. Opportunities opened… That launched my public service career and drove my passion in leadership.”

Cambensy later would be inspired by a woman to join the City Planning committee, and her involvement in local politics also triggered City Commissioner Sarah Reynolds to make her own run. “It was just the ‘ask’ of another woman that meant the world,” Cambensy says. “If you have the fire, seeing another woman do it, or being encouraged by them, it’s huge.”

Some of Cambensy’s other female influences in politics are Gretchen Whitmer and Elizabeth Warren. “My favorite quote from [Warren] is, ‘If you don’t have a seat at the table, you’re on the menu,’” says Cambensy.

“If you don’t have a seat at the table, you’re on the menu.”

No one would influence Sara Cambensy to get a seat at the table quite like her grandmother. She is 100% Swedish, stubborn, and strong, as Sara likes to describe in a story she remembers from childhood.

All of her grandmother’s sisters lived within few hundred miles of each other in the U.P.. They would get together often. One day, they went out blueberry picking. On a little two rut road in Forsyth Township, they came across a man in a truck coming the opposite way at them with nowhere to pull off. They came to a standstill in the middle of the woods. The man started honking at her to get her to move the car, and yelling, ‘Get out of the way!’ If Sara’s grandmother pulled off the road, they would’ve gotten stuck.

“This gentlemen turned off his truck,” says Cambensy. “He picked up a newspaper in the seat next to him and started reading it. My grandmother’s reaction was, ‘Alright Edith, get out of the car. This is where we’re blueberry picking today!’” Like her granddaughter would do in politics, against opposition, she stood her ground.

After a long while, the man disgruntledly waved at them, turned his truck back on, and and let them by.

“I’ve had women, like my grandmother, who told me I could do anything,” she says. “If you want to play hockey, or baseball, go show them what you can do. It was the message of ‘It doesn’t matter if you’re a woman, if you want to do something, go for it.'”

Sara Cambensy says she never wanted her campaign to focus on the fact that she’s the ‘woman candidate’ but rather that she is the right candidate that could get the job done. She says being a woman has influenced her political style and decisions making process in that she’s more thorough and analytical.

Policy-wise, there are a multitude of women’s issues Sara Cambensy supports; paid maternity leave for men and women in the public sector, and access to birth control among them.

In City Commission her lone votes against Duke LifePoint hospital infrastructure made others call her ‘negative’ and an ‘obstructionist’. Cambensy says the 6:1 vote made her feel like an outsider, but her analytical perspective on the 20-year agreement was what shaped her decision making. “I wanted to slow down. I wanted us to look at this agreement differently. I was suggesting to have more public forums before we signed something that tied us down with a 20 year agreement… I believe I made the right decision, and I still do,” she says.

We live in a patriarchal society. Politics is often dominated by men. Cambensy notes that women make up 51% of society and only 20% hold political office, a dynamic that plays out statistically accurate during city commission meetings. There are seven commissioners. Sarah Reynolds and Jenna Smith are the lone females on board, just as it was before Smith was appointed to Cambensy’s seat. Going into 2018 general election, three of four candiates are female and are likely to gain an equilibrium for the first time in city history.

She never saw the uneven representation as an obstacle, but as a challenge for her and other women to aspire for more.

“[Sarah Reynolds and I] typically have a lot of questions before we’re willing to make a decision,” says Cambensy. “We want to make sure we have all the information. It comes from the nature of women wanting to see the whole picture. It’s kind of a motherly instinct. Being a woman definitely shapes intuitively how we go about making decisions as elected officials.”

Sara hopes representing Michigan’s 109th will inspire other young girls to have the confidence to take up leadership roles in grade school, and stand up for the things in which they believe. 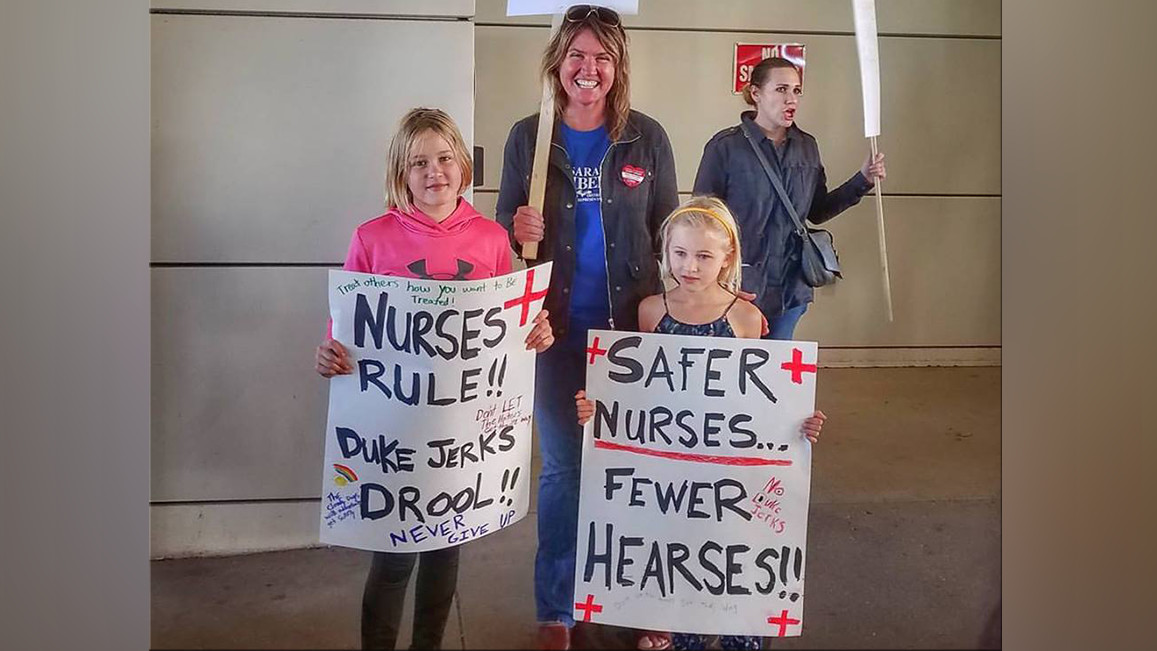 The most endearing photos of Cambensy to surface on the campaign trail are ones with young girls, who are looking up to her as a role model. Keith Glendon snapped a photo of his two girls with Sara during the nurse’s strike as they rallied in support of better staffing levels at UPHS-Marquette.

Later, one of Glendon’s criticisms about both sides of the campaign in the 109th was that there was very little talk beyond logging and mining jobs for a changing U.P. economy. Glendon encouraged more discussion about “education and investment in economic engines of the current and future decades,” he writes on Facebook, “including cyber security, software, renewable energy, tech sector, new agriculture, sustainability jobs.”

Only 6.7% of women are graduating with S.T.E.M. degrees. Glendon is teaching his girls computer coding and created a Marquette chapter of Coder Dojo to advocate for S.T.E.M. related skills in academics.

“I’m still a strong believer in our roots; our mining and timber industry,” responds Cambensy. “As Keith talked about this new economy, they require steel, metals. Our computers require wires for broadband. All of our technology is dependent on the metals we mine. From a regulation perspective, I look at us compared to China. I want those jobs here. At the same time, I look at what he’s teaching his girls, just to have the push to be comfortable to go into science and math dominated fields that have traditionally been held by men, I’d say, ‘Yeah! Keep going!’ This is where their generation can help set a new precedent in terms of being able to step up and hold those jobs and be very knowledgeable in them.”

Cambensy highlights one of the bigger obstacles for women is confidence. “A lot of times girls and women don’t have a lot of confidence,” she says. “I know I didn’t in middle school when I had math class and didn’t perform as well as my brother. ‘Oh gosh, I come from a family of engineers. I can’t get a C in math.’ I just felt very insecure about my abilities at that time.”

Sara Cambensy says to have parents and women to look up to that say, ‘No, keep going. Keep pushing yourself’ is instrumental. “It feels good to know that a lot of people are looking at my campaign and telling their daughters, ‘You can do it, too. You can do whatever you want, and whatever you imagine. It doesn’t matter if you’re a boy or a girl, you can do it!'”

A career in politics like Cambensy’s may be ignited by first inviting your daughters to your polling precinct. Encourage them to witness your participation in the process.

Sara Cambensy defeated Republican Rich Rossway in the special election to fill the late representative John Kivela’s seat last November. Since elected, she became the first woman to represent the 109th district. It made the last election historic for the Upper Peninsula. After an uncontested primary, Cambensy now faces Republican Melody Wagner in November’s 2018 General Election. She says regardless of the outcome she’s honored to be considered a trailblazer for the next generation of local women in politics.

This message is only visible to admins:
Unable to display Facebook posts